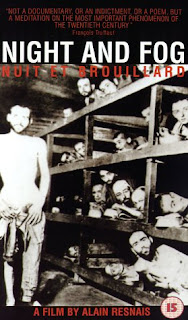 In the last three months I took a rather long break from blog writing and how things have changed! Diane Amann announced the end of intlawgrrls, a new year has begun (happy new year of the snake), my friend acquired a projector to watch movies on and we've gone from a dull cinematic year (2012) to an exciting Oscar year (2013).  During the last couple of months, I took a break from human rights films and watched some relatively new releases (Best Exotic Marigold Hotel probably the only one which I could tentatively recommend due mainly to its stellar cast), and discovered some older movies (Mysterious Skin by Gregg Araki, Summer with Monika by Bergmann, re-watched a host of Almodovar films in preparation for his new release in March.

Last week, I restarted my blog preparation by hosting my first 'Feminist Film Lovers' night at my flat.  We started with 'Night and Fog' by Alain Resnais.  Resnais' documentary has been the subject of much academic work and is considered to be one of the most important films made about the Holocaust.  The film challenges the concept of 'ineffability': that the Holocaust cannot be spoken about or accurately represented.  Instead, filmmakers such as Resnais believed that the Holocaust must be spoken about, to avoid forgetting.  Made 10 years after the liberation of the concentration camps, Resnais was originally reticent to make the film until Jean Cayrol was hired as the scriptwriter.  Cayrol, a French poet, had spent time at Gusen concentration camp.  Remembrance, celebration of Jewish culture and experience and responsible representation are now considered axiomatic in considering the legacy of the Holocaust.  Night and Fog, left us speechless. In its short 30 minutes, it is the most powerful Holocaust documentary I have seen.


Over the course of the next few months, our group will be meeting to screen 6 films which I have chosen (many of which I have previously reviewed).  These films serve to set the tone and kickstart the group.  Following this I am opening up the floor, with members picking the films to screen and providing the reasons for their choice.  Feel free to do the same wherever you are!